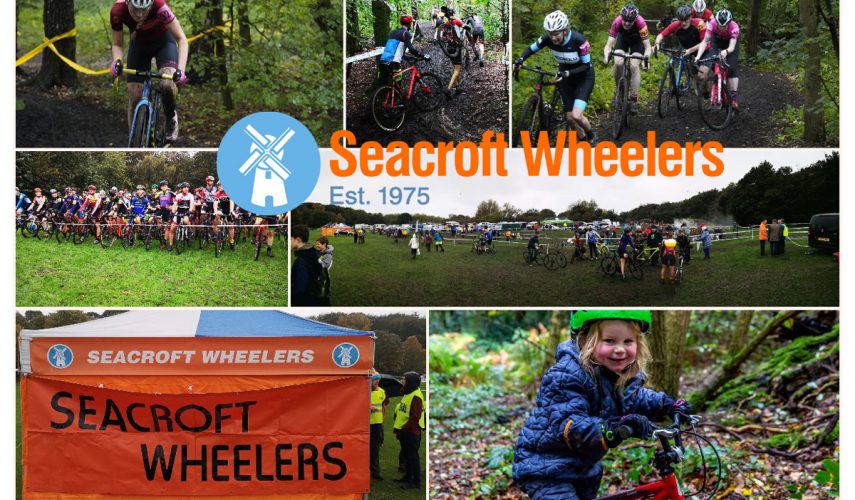 Around 350 riders, aged from under 8 to over 50, turned up to ride the second round of the Winter Cross series at Temple Newsam on Sunday 13 October 2019. Hosted by Seacroft Wheelers, the event was in memoriam of Wheeler Jonathan Noble. The build-up of rain during the week and on the day made for some very challenging conditions with a mud bath of clogged chains and busted mechs. Nevertheless, with ony 20 ‘DNFs’ (Did Not Finish) it made for some great competitive racing in all categories, including the under 8s ! 🙂

In the women’s seniors, Sophie Thackray (Scott Racing) glided over the mud to victory, completing 5 laps in a total time of 45m50s and beating Hannah Saville (Cyclo Cross Rider) in to second place by over 5 minutes. In the men’s senior,s Jenson Young (Garden Shed UK/Scott RT) built up an early lead from lap 1 and improved on this each lap completing 7 laps in 57m24s, finishing nearly 2 minutes ahead of second-placed Jacob Scott (Albion CC). Full results can be found here.
Definitely a day for the pit crews and second bikes to play their part in helping the riders battle the brilliant course that had something for everyone: technical wood sections; root laden descents; hurdles; climbs; grass and mud, mud, mud 🙂

Thanks to all the clubs that supported this event and chapeau to all that pinned on a number and took to the start. A special mention to the Seacroft Wheelers that entered, first-timer Sam Ritchie in the Under 14s, Astrid Pot in the Women’s Vets, Andy “the tornado” Bramham in the Men’s Seniors and returnee Sean Jackson in the Men’s Vets 50+. Well done everyone, you represented the club and battled hard 🙂

A huge thank you to all the organisers, marshalls, sign on, photographers, course set-up and clear down and everyone that contributed to make this event possible and another resounding success.

Some thoughts from the day:-

“riders powering through the mud was a brilliant sight. Sophie Thackray riding the hurdle then controlling the adverse camber climb to the avenue was an absolute joy to watch.”
Martin

“Thanks everyone who helped, I thought it was a belter from set up to take down”
Billy- event organiser

Some more pictures and videos of the day can be seen below, on the slide shows hover cursor on pic to pause and display name and use the arrows to advance left and right.

Some more action from the day